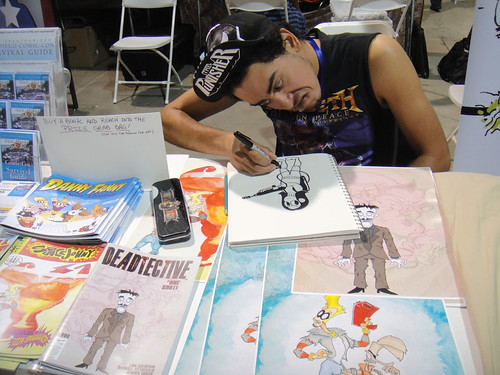 Once upon a time, a well-known painter was working on a painting. It’s an incredibly beautiful painting to be shown at the Airport during the upcoming festival season. The painter wanted this painting to be a master piece.

He worked on it for weeks on the top of a 24 storey building. He was consumed by and excited with his own painting that he unconsciously took a few step backward while admiring the 2 x 8 m painting. He didn’t look back when he walked backward. He kept on walking backward until it was a step away from the edge of the 24storey building. Just one more step backward and he could have fallen to his death.

A man saw what the painter was doing and was about to shout at him to warn him when he realized that his shout might surprise the painter and thus make him take that fatal one step backward and fall down. So the man took a brush and some paint and began to paint on the beautiful painting until it was damaged.

Upon realizing what happened to his painting, the painter got very angry and moved forward to hit the man. However, some other people who were also present at the vicinity held him and showed him his last position which almost made him fall.

MORAL: Sometimes we have painted our future with such beauty and dreamed of beautiful days we will spend with our loved one, but then God seemes to destroy our beautiful painting when God sees what danger lies ahead of us. Sometimes we are angry and annoyed by what God has done to us, but one thing we have to keep in our mind is that our Creator is Most Wise and always keeps our best of interest in mind!

So when God, in His Infinite Wisdom, tests us with a situation that we think is  difficult or takes away something that in our mind was good for us, we need to remember that perhaps it may not be so. Perhaps if we had continued in our way, it might have been harmful for us and whatever God decreed for us is actually better for us, for He is All-Wise and All-Knowing.

35 Responses to The Great Artist