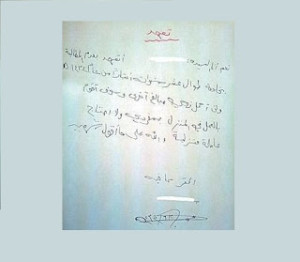 As each generation comes, both man and woman are becoming increasingly dependent on technology and help rather than doing it themselves. Aside from laziness, in the case of women, what I have seen in the short time I have been in the Kingdom of Saudi Arabia,
women seem to judge status and wealth by the number of maids that have
been employed by a family, or just if they have a maid or not. Now I may be wrong and it is just what I have seen and understood during my stay in the Kingdom, but no one can argue that the modern day wife or mother is far more dependent on help and advancement in childcare, than our mothers or those before us.

Yes, you can argue that advancements in technology and design are inevitable with time but the advancement in the dependency on maids, also known as the maid culture has also taken over the majority of the married women of Saudi Arabia.I am by no means saying whether it is right or wrong, I am just stating a fact. However there is one more thing that Saudi women have become increasingly worried about. Well not just these days, but since ages the woman has been afraid that her husband might get another wife. When the maid culture and suspicion mix, it hardly results in a good scenario.

One such hilarious case occurred in the Kingdom of Saudi Arabia where a wife pleaded to her husband to hire a full time maid even though she was completely healthy and the husband had pleaded many times that they could not afford one at the moment. However the wife kept on insisting to hire a full time maid to look after the house and the couple’s child.When the wife refused to give up the demand, the husband came up with a unique solution to teach her a lesson and also get rid of her maid culture. The husband then contacted his brother in law and sought his help after which he brought home an extremely pretty maid. The news was initially reported by the Arabic daily akhbaar24 which stated that when the wife saw the pretty maid she outright refused to let her into the house, now the man insisted to his wife that they keep the beautiful maid and complete all the legal transfer procedures.

Panicked and confused the woman agreed to sign a deal with her husband which stated that the wife would not demand her husband to hire a full time maid for the next ten years or until the responsibilities of the wife at home increases i.e. more children.The woman who was willing to do anything to get rid of the beautiful maid from her house and away from her husband, wrote down the pledge on a piece of paper and proceeded to sign it as proof that she would not ask for a maid again for the next 10 years.

Saudi Man Giving Bath To His Lion Unbelievable…(***)
Can You Solve This..???

One Response to Wife Dropped Pleading For Housemaid When Husband Brought Pretty Maid…!!!